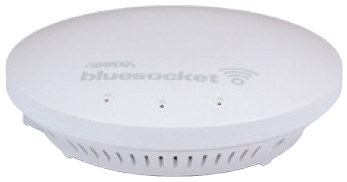 The Bluesocket 1920 and 1925 APs offer enterprise-grade performance, with two transmit and two receive streams providing data rates up to 300 Mbps per radio for a total of 600 Mbps per AP.

The Bluesocket 1920 and 1925 APs come in a revolutionary, smoke detector style, costeffective package that is ideal for educational institutions, small and medium enterprises (SMEs), and large enterprises who are on a tight budget but cannot compromise on performance. The APs offer higher receive sensitivity on both the 2.4 Ghz and 5 Ghz radios to compensate for Bring Your Own Device (BYOD) type handheld devices such as smartphones and tablets that have a fraction of the transmit power of traditional laptops. This results in more reliable wireless coverage for an improved end-user experience.